Montefrío enjoys a large number of popular festivities throughout the whole year. Read more about them!

Christmas and the Three Kings parade

At Christmas, the town council organizes a varied program of activities, where the Three Kings Parade stands out. This long-awaited parade, with its spectacular handcrafted work in charge of the Amón-Ra Association, turns into a beautiful surprise every year. 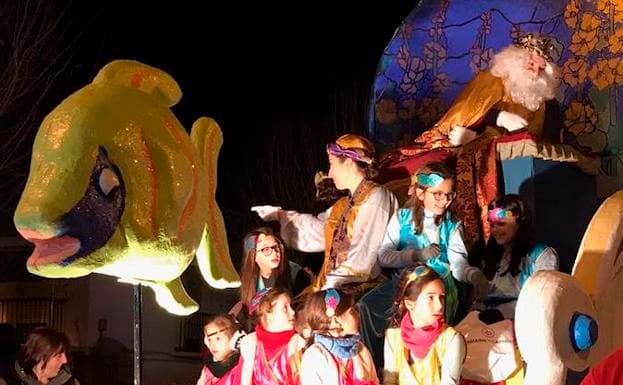 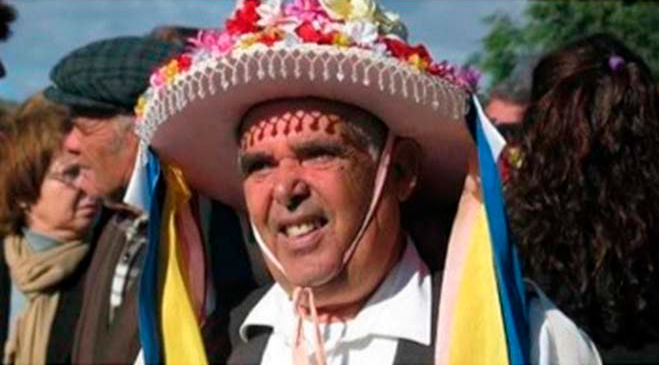 Celebration of San Sebastián and Santiago in Lojilla

The village of Lojilla is the only one annexed area to the municipality. They celebrate two festivals in which you can taste an extraordinary stew of Choto with garlic: the day of San Sebastián, and the Day of Santiago. On the day of San Sebastián, we can also find some locals dressed in the typical costume, which consists in a traditional party dress adorned with coloured paper ribbons. Their main goal is to raise funds for the party. They are called “The fools of Lojilla”

“La noche de las Lumbres” (bonfire night) is an ancestral celebration that takes place by the end of the olive harvest. Children used to swarm tirelessly through the town, collecting everything that could be burned to compete in greatness and splendour with the other bonfires. The jackpot was to get “rondeles”: esparto mats that were used to press the olives in the oil mills. Being impregnated with oil, they would burn like torches.
In the light and warmth of the fire, all kinds of meats and the appreciated local cold cuts are tasted in this celebration. People dance and sing popular chants of the Candelarias around the bonfire. That night Montefrío offers an amazing view from the distance: sparkling light dots that, as a blanket, spread from the furthest farmhouses to the centre of the town itself. 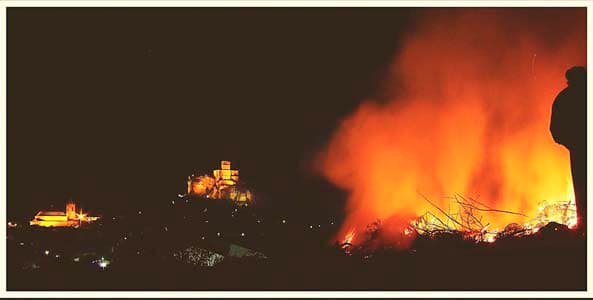 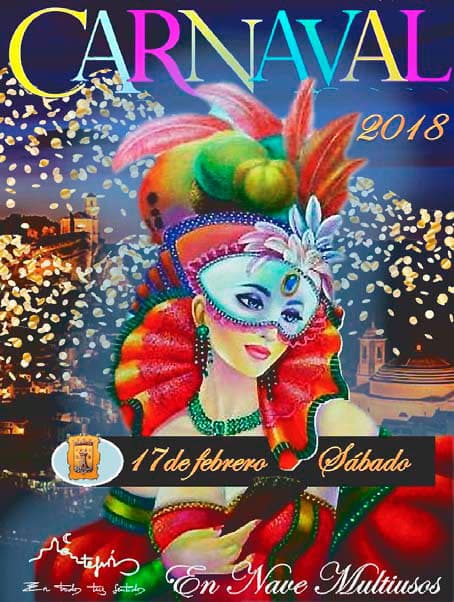 The carnival is a deeply rooted and popular festivity. People participate in a very spontaneous and creative way. It is organised by the town hall of Montefrío but this festivity has been celebrated even in times of no institutional support.

Some years ago, the effort of a group of local people made possible the recovery and creation of the current brotherhoods of Holy Week. They managed to restart one of the most original and ancestral processions of the province of Granada: that of “los Recaícos”. This tradition had disappeared in the 60s but the new brotherhoods decided to revive it for the enjoyment of neighbours and tourists.
The representation of “Los recaícos” takes place during the procession of Good Friday, which departs from the Church of La Encarnación around 11:00 in the morning. As a brief description: the image of Our Father Jesus Nazarene “whispers” something in the ear of St. John who, in turn, transmits the message to Our Lady of Sorrows. 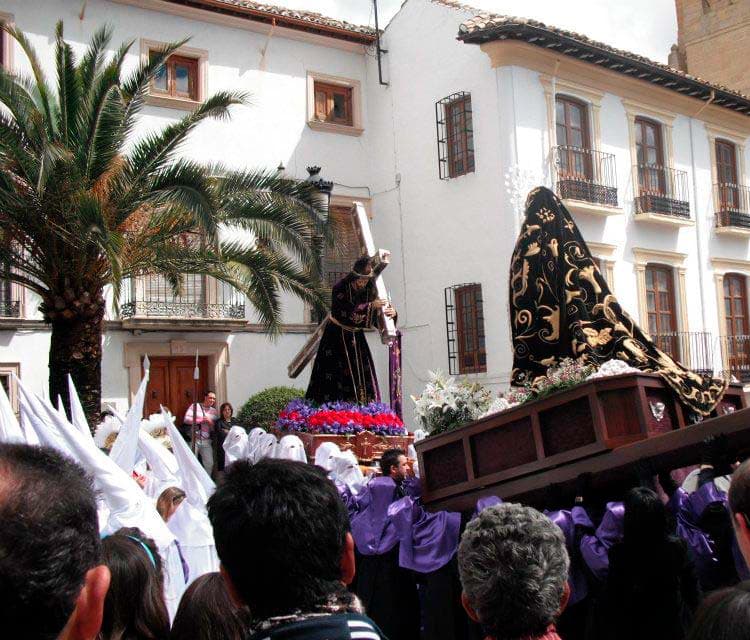 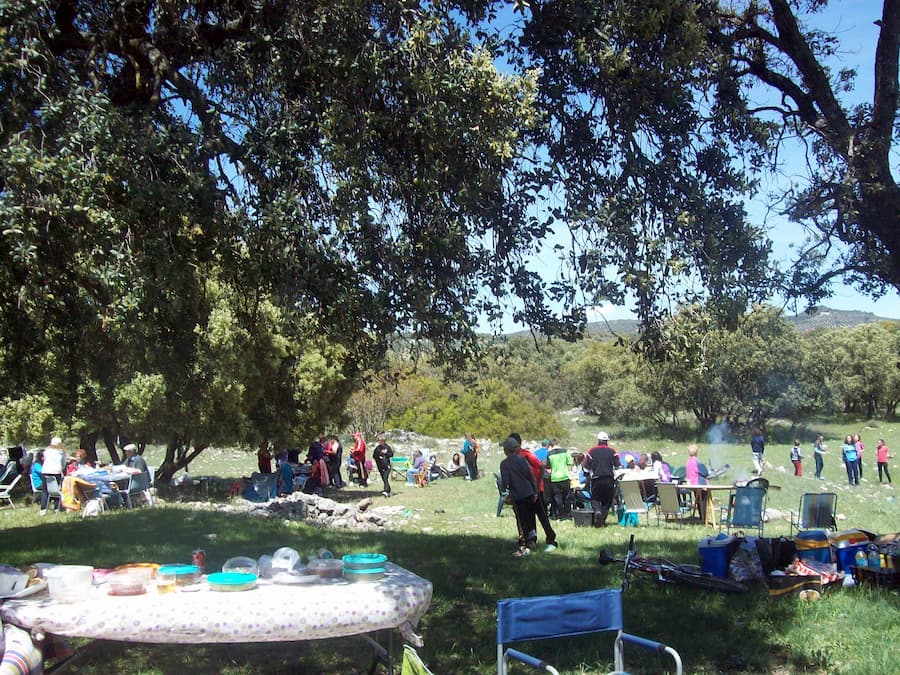 San Marcos is a deeply rooted festivity among the inhabitants of Montefrío. There are no carts, pilgrims, or processions. It is simply a pleasant picnic day in the countryside where people enjoy the indispensable dish called “Remojón de San Marcos” (roasted peppers and tomatoes, tuna, hard boiled eggs, olives, olive oil, and salt), along with other meals such as homemade sausages, chorizo, “lomo de orza” (pork loin preserved in lard), a variety of omelettes, hard boiled eggs and desserts such as muffins, turrolate and many more. That day it is customary to carry handmade kites and “rats” (a ball adorned with coloured paper, which is thrown up in the air) for the fun of children and adults. Families and groups of friends gather in different nature spots or in farmhouses, leaving the town almost deserted.

Day of the Cross

It is a very popular festivity in Granada and its towns. However, in Montefrío this tradition has a distinctive feature which denotes originality, industriousness and good taste. The crosses that we can usually find in our capital city and in its different populations are made of carnations; but in Montefrío, visitors are impressed by the creativity of the chosen motifs, the original materials, the shapes and the outstanding artisanal work. To give an example, one of the most spectacular works carried out by the Elderly Day Centre was a cross built with hundreds of caps of soda and beer bottles, painted similar to the ceramic style from Granada with an amazing visual result. 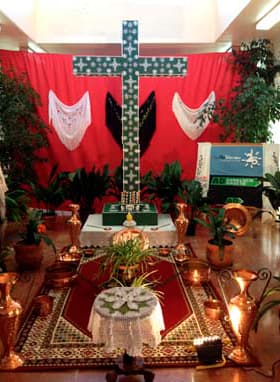 It seems that the origin of this celebration goes back to a time of drought in which they decided to take the religious statue out of the church, and miraculously it rained again. Together with the procession, it is traditional that people buy bread rings which are blessed and can be used for healing purposes. After the procession, a popular feast takes place.

La Fiesta del Rayo (the Day of the Lightning)

On the last Sunday of May, hundreds of neighbours gather in the Church of La Encarnación – the “Round” Church as it is commonly known – to hear mass and walk with the Virgin of Los Remedios through the streets, on this very exceptional date for Montefrio.
According to legend, on 29 May, 1766, during the feast of Corpus Christi, many people went to the Church of the Villa to attend mass when suddenly a powerful storm formed. In the middle of a giant rumble, a huge lightning bolt struck the church breaking the stained glass windows and causing a large stone to collapse from the vault, falling on the faithful. In the middle of the enormous dust cloud that rose, the Montefrieños feared the worst. However, when they left the church they realized that no one had died. Only a small dog called Sultan was moaning pitifully because the lightning bolt had cut off his tail. He had had the misfortune to sneak inside the temple following his owner. Then, the neighbours began to shout that the Virgin of Los Remedios had performed a miracle and so they promised to celebrate a mass and procession every year on May 29, all paid by the local people.
It is important to mention that at first, the procession included the Virgen of Los Remedios together with Santa Bárbara, the patron Saint. This detail confirms the saying that “nobody remembers Santa Barbara but until it thunders”. As a result of the lightning incident, the local residents made an odd promise that stands up to this day, more than two centuries later: all dogs are allowed to enter the church of La Villa. 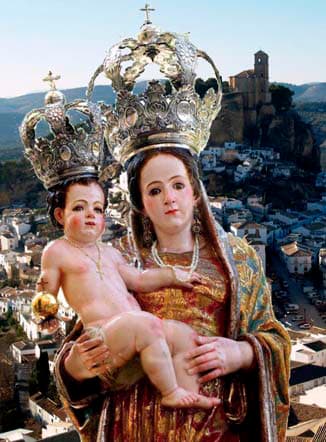 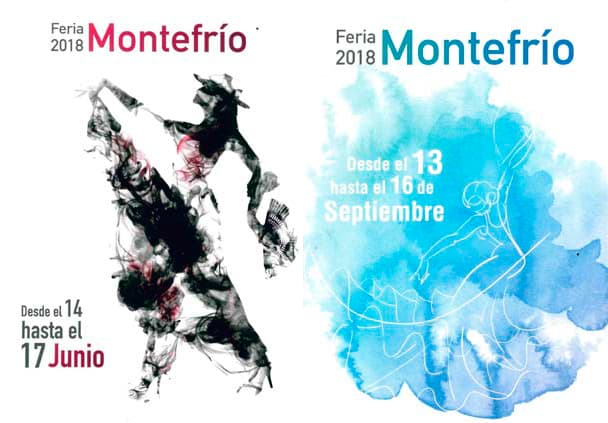 These two fairs derive from livestock and agricultural festivals held in the past. Although the original concept is practically gone, these festivities have survived by adapting to current way of life and preferences. 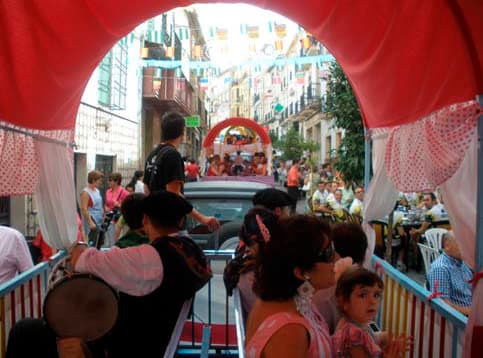 The festivity in honour of La Virgen de los Remedios is the most important celebration in Montefrío. It takes place around 15th August, which is specifically the Day of the Virgin. At present, multiple cultural and festive events start by the end of July until the end of August. The program of activities can be consulted at the Town Hall website. 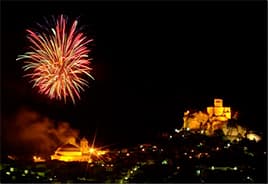 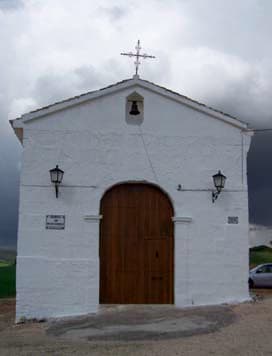 The typical countryside “Funciones”, were rural festivals in which the residents of the “cortijos”, sometimes very distant from each other, had the opportunity to meet a few times a year. On a threshing floor and dancing pasodobles, they could flirt and look for a partner or comment on the crops. Large pots of “Arresol” (homemade coffee liqueur) were left empty by nightfall. Some of these festivities are preserved today, such as the one in “La Viñuela”, the “Barranco de las Tinajas”, or the “Ruíz-Pérez” Fiesta.
Esta página utiliza cookies y otras tecnologías para que podamos mejorar tu experiencia en nuestro sitio: Más información.