A wide variety of monuments you will fall in love with


The Arab fortress built on top of a rocky outcrop is an element that enhances the charm and unique personality of Montefrío. It is undoubtedly a major landmark. Abu Abdallad Yusuf ordered to build this fortress in the 14th century as part of a series of fortifications located on the northwestern border of the Nasrid kingdom. The work was carried out by the same architect of the Alcazaba de la Alhambra.
Although there are no plans of the castle, it is known that it had a large keep, three military squares and two large water tanks. The fortress was also the residence for seven years of Aben Ishmael III, prince led by the abencerrajes, who would later become king of Granada with the name of Yusuf V.
In the past, it was one of the most important strongholds that defended the Kingdom of Granada but nowadays only a few elements remain visible: one of the towers, the water tanks (aljibes) and some sections of Islamic wall that include three turrets. These Arab remains stand out over the modern fortress. 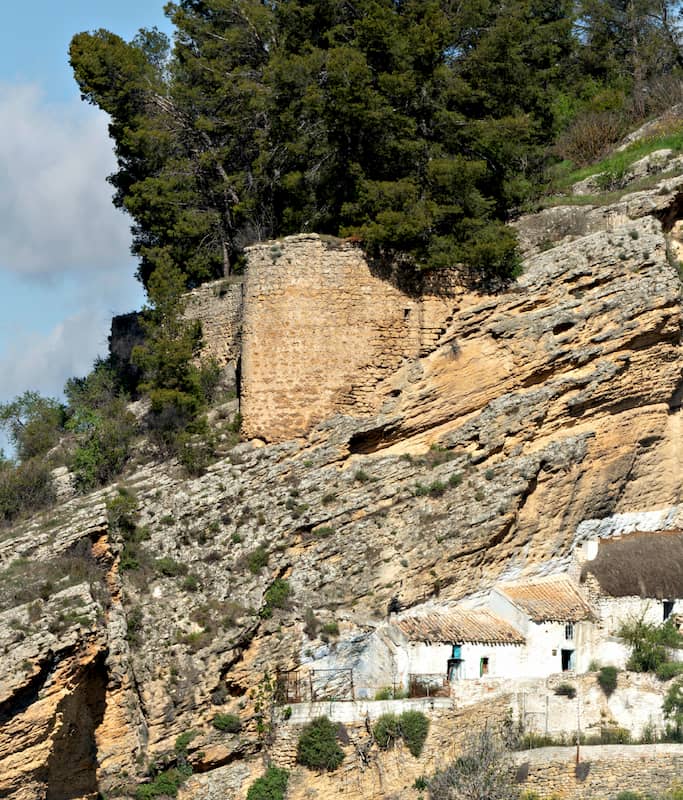 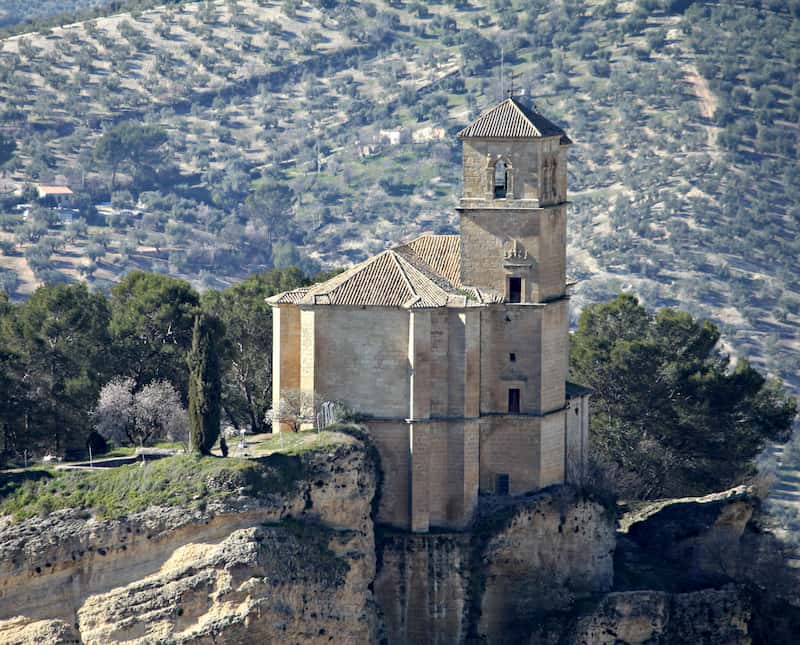 Built upon the remains of the Arab fortress in the 16th century, the church of La Villa is one of the so-called “Seven Villas” churches, designed all of them by Diego de Siloé. A Renaissance-Gothic style church, it is a rectangular building with a single nave and an poligonal apse covered with a semi-dome . Semicircular arches give access to three chapels built on each side, between the buttresses. At present, it houses El Centinela, an Interpretation Center. This is an interactive museum that makes easier to understand the history of the last frontier of Al-Andalus from the perspective of the western part of Granada.

Its construction dates back to the 16th century. It is a church of Renaissance style, built with stone ashlars,  with a semicircular arch on its facade and pediment flanking the arch. It was abandoned  when the Church of La Encarnación was finished. Acquired by the City Council in 1940, it was initially used as a grain warehouse and once rehabilitated it has been assigned to different functions. At present, the Music School of Montefrío is headquartered in this building. 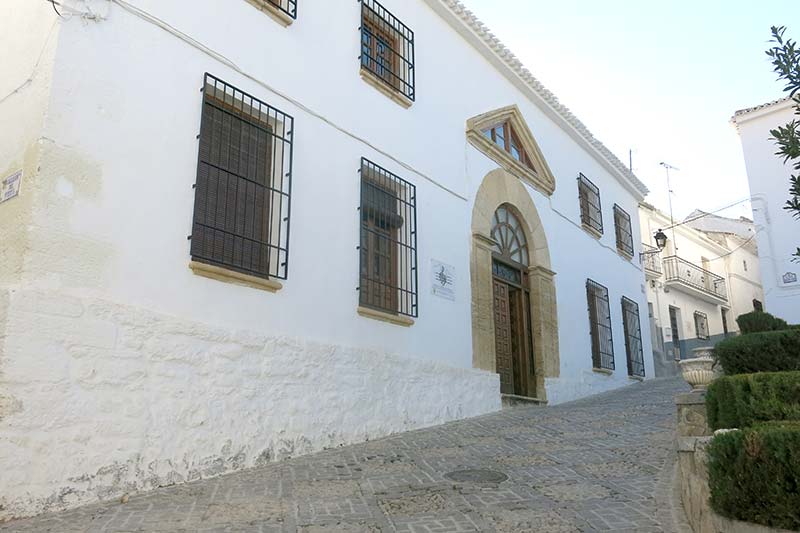 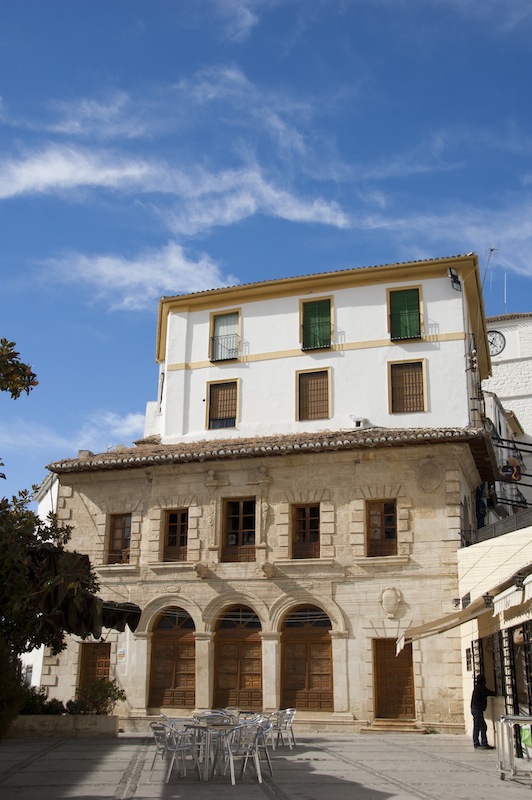 It was built in 1579 during the term of Mayor Don Gil Bartolomé to house the  town hall of Montefrío. People used to think it was a Guild Office, but in reality its name is related to the official documents  and procedures of the municipal council. Its typically Mannerist facade is one of the most prominent features of the building.  On the lower floor, we find a loggia of three semicircular arches erected over steps. The royal coat-of-arms of  Philip III are located on both sides, over two dintelled doors.  An inscription runs along the facade and separates the first and second floor, which has five windows. The central window, of greater dimensions, would correspond to the main balcony. The Tourist Information Office is currently located on the upper floor.

It was founded in 1500 thanks to the testamentary donation signed by Don Juan de Carrión, herald of the Catholic Monarchs. It is one of the oldest hospitals in the province of Granada. Its original structure has been modified over time exept for the facade, the least reformed part of the building. One more floor has been added in addition to the bell gable on top. After a rehabilitation the building is used as administrative offices. 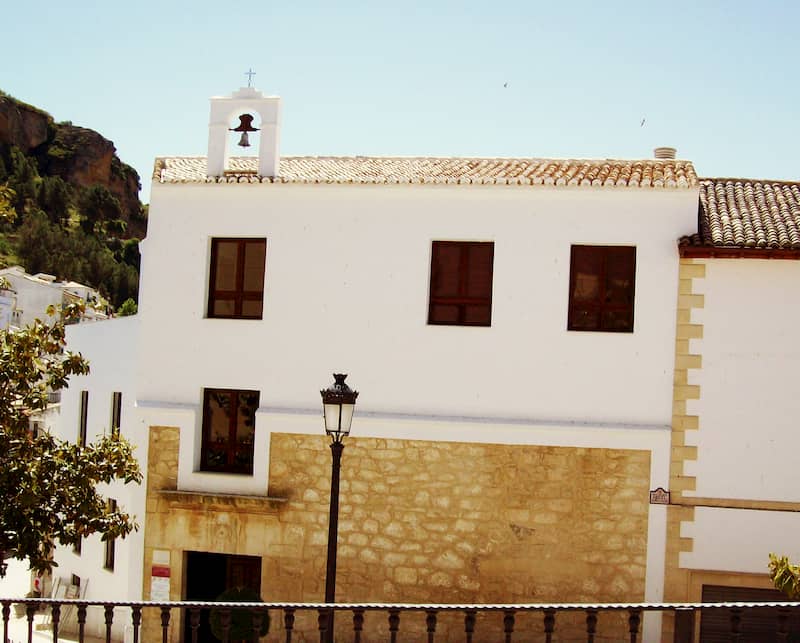 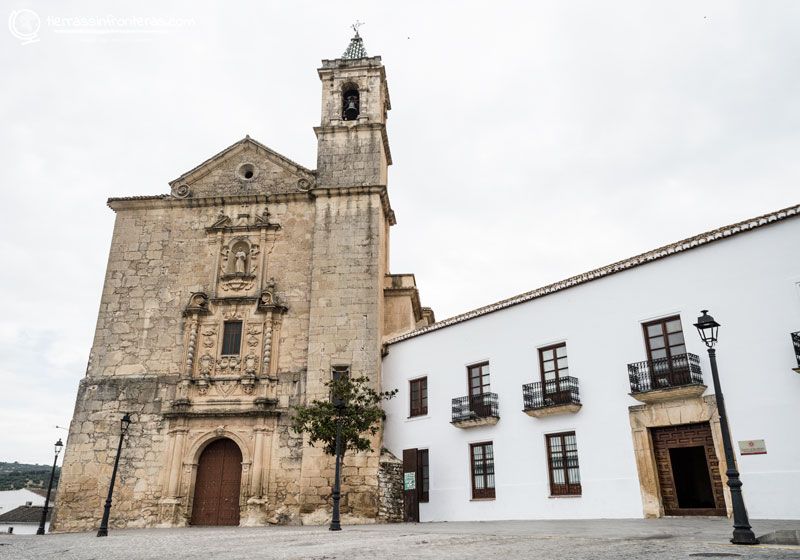 
It was built between 1737 and 1763 outside the town walls, near Cerro del Calvario. Its author is considered unknown , but based on the formal characteristics of the building, it seems he was a Franciscan architect disciple of Hurtado. The church was dedicated to San Antonio de Padua. Inside there is a rectangular central nave covered with a barrel vault with lunettes. On both sides of the main nave, there are three chapels connected to each other by passageways. At the end of the central nave we find the transept on which a drum dome is raised. The main altar is covered with a half-barrel vault. This church, in a late baroque style, is the most significant work of this period in town. Its beautiful facade, resembling an altarpiece, stands out.


A Franciscan Order settled in the Convent of San Antonio right next to the church in the 18th century. The different conventual premises were organized around a square cloister with semicircular arches supported by Doric columns and a fountain in the centre. After the Ecclesiastical Confiscations of Mendizábal, the monks left and the church became part of the secular clergy. Private individuals obtained the ownership of the convent and turned it into a bakery. That is why it is still popularly known as “ la Máquina”. After being acquired by the City Council it has been rehabilitated and is used for institutional and cultural events. 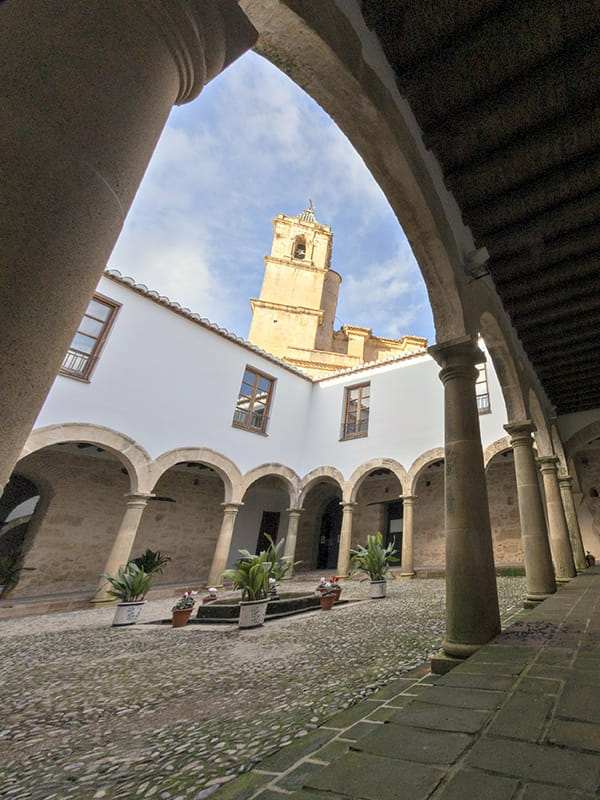 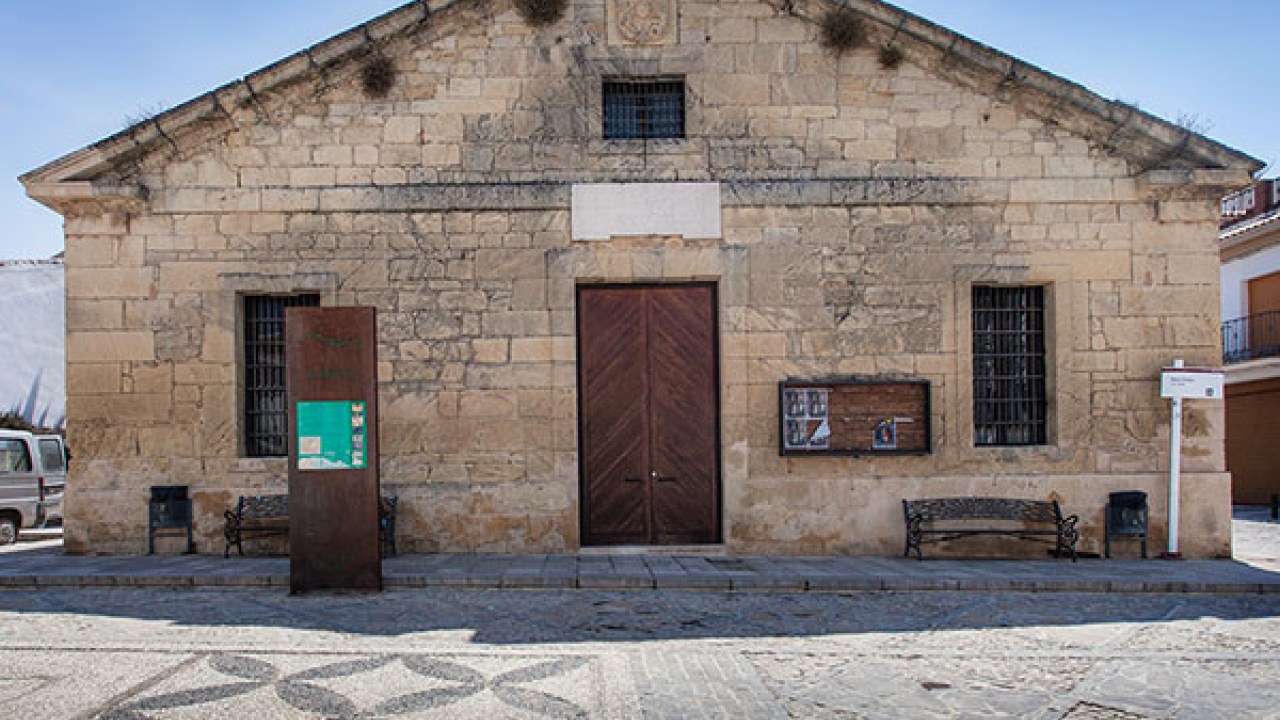 It was built at the end of the 18th century (1795) by the architect Francisco Aguado. This neoclassical building, destined for grain storage, has a rectangular floor plan and is made of ashlars with wooden slabs and gable roof of Arabic roof tiles. Inside we find a large nave divided into three spaces by rows of square pillars.
The main façade is extremely simple, limited to a lintelled door with a commemorative inscription on top about the termination date. In the pediment and over the window, there is a Bourbon coat of arms. It currently houses the Local Cultural Centre.

This church, built between 1786-1802, is one of the largest and most important Spanish neoclassical churches. It was designed by the architect Domingo Lois de Monteagudo, inspired in the Pantheon of Agrippa in Rome. It has a circular floor plan with two attached rectangular structures, one at the front and one on the opposite side, where the main chapel is located. The tower was erected behind the chapel. The most impressive element about this church, in addition to its acoustic peculiarities, is the enormous interior space with its dome, 30m wide. 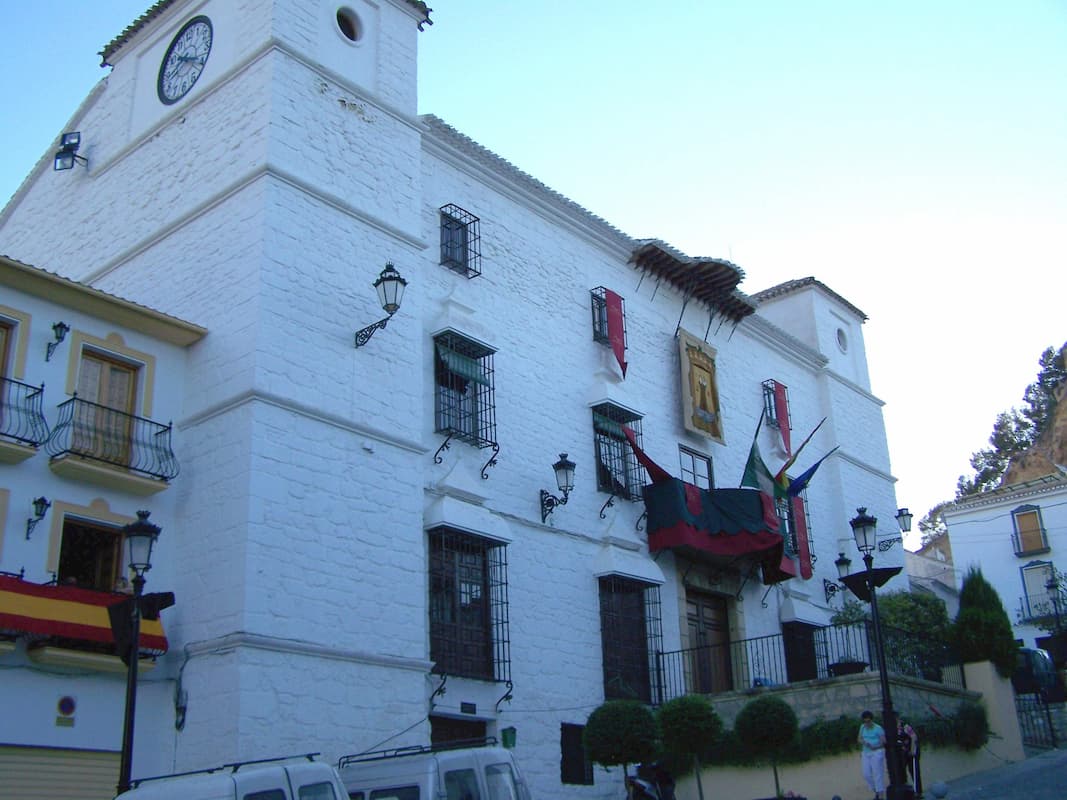 Old private palace built in 1787 by Francisco Aguado, as a private residence of the García-Valdecasas family. Whitewashed masonry was used for this building. Flanked by two towers, it corresponds to the typical Andalusian stately constructions. After the civil war it suffered deterioration and became municipal property. The town coat of arms made of stone is preserved inside.
Esta página utiliza cookies y otras tecnologías para que podamos mejorar tu experiencia en nuestro sitio: Más información.